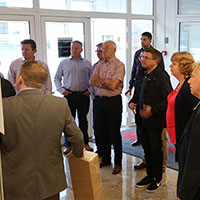 Dexion’s strong network of suppliers from the United Kingdom meet yearly to update the status of their endeavours, get introduced to the latest new solutions from Dexion and plan future strategy.

This year, it was decided to organize the meeting in Romania on the 10th of September, so the distributors could see for the first time the manufacturing plant where much of the racking sold in the last years were manufactured, such as P90 pallet racking systems, cantilever long goods storage solutions as well as a wide range of accessories.

They could also visit other major divisions hosted by the facility, such as the Sales Support Centre, a team of 45 talented engineers that make the designs for all products quoted by the Group’s Sales offices, the Group’s R&D team which designs Dexion’s new products and the Product Testing lab that ensures that these new products are created in accordance with the strictest safety regulations in the field such as European Norm EN15512.

After visiting the Dexion Factory, our British colleagues went on to visit some of the beautiful landmarks nearby, including a journey with the Cable Car up Tampa Hill and the world famous Bran Castle. Good timing helped them also take part in the traditional merriment of the local Oktoberfest party.

The UK distributors were impressed by Romania and the modern Dexion facility thanked the Dexion UK and Romania teams for the good event organisation and proised to visit Romania again.