They say necessity is the mother of invention. A saying never more true than with the birth of Dexion, brainchild of 50-year-old Greek-Australian, Demetrius Comino.

Dexion is a prominent member of Gonvarri Material Handling (GMH), a family of brands which can trace its origins back to 1856.

In 2018, Gonvarri Industries acquired the Constructor Group comprising of Dexion, Constructor and Kasten and Gonvarri Material Handling was formed to become the new group parent.

The group brands include:

Dexion: formed in London UK in 1937 by 50-year-old Greek-Australian, Demetrius Comino. Comino developed the 'Dexion Slotted-Angle' (1947), which introduced the world to adjustable storage and would go on to blaze the trail for Dexion's purpose-built pallet racking and shelving systems. It became part of the Group in 1999.

Kasten: started 1886 by Hjalmar Henrik Kasten who established a metal works company in Helsinki Finland. They manufactured their first shelves in 1951 and today they are market leaders in Finland.

Constructor: Originally founded as Høvik Verk in 1856, a glassworks at Høvik, Norway - part of Christiania Glasmagasinas.  Between 1970 - 2000, through mergers and aquisitions of Høvik Stål, Electrolux Constructor, Kasten, Krammer & Zeuten, ETH and MTH, it grew to become Scandinavia’s leading company within storage, archive and logistics solutions. The Constructor name was adopted in the late 1980s.

Stålteknik: Gonvarri Stålteknik AB has its closest origin in Canrena System AB. The company has been active since the 80's and has over time expanded through active product development as well as company mergers with, among others former Stålteknik in Fellingsbro.

Gonvarri Stålteknik AB are experts in selected products and customizations in material handling like pull-out units, cantilever and mezzanine solutions. Products are mainly found in retailers in Scandinavia, but we are also represented in Germany & France. Sales are made to partners and resellers (B2B).

Kredit is a well-known brand in the European material handling industry and beyond, being one of the key players within the mobile racking segment. The company has been founded by Petr Ševčík in 1991 and is headquartered in the Czech Republic, where their entire product line is developed and manufactured.

Towards the end of 2019, Gonvarri Material Handling announces an agreement for acquiring 100% of the shares of Kredit.

The Dexion company (from the Ancient Greek meaning 'Right') was originally forged from Comino's hunger for efficiency gains across his printing business. Namely, the need for paper and type storage racks that could quickly and easily be dismantled and reused.

Comino's persistence and tenacity paid off. By 1947 he had developed the 'Dexion Slotted-Angle', a framing material that was, weight-for-weight, stronger than wood, and that could be stored in a fraction of the space needed for wooden timbers.

The first adjustable storage system had arrived, and blazed the trail for Dexion's purpose-built pallet racking and shelving systems.

Dexion quickly became the benchmark for innovation with a number of outstanding milestones:

It is testament to those early pioneers that these systems are still much in demand today. 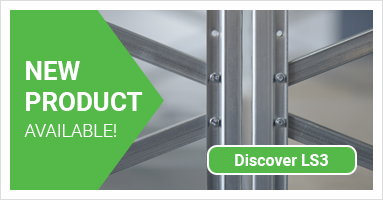